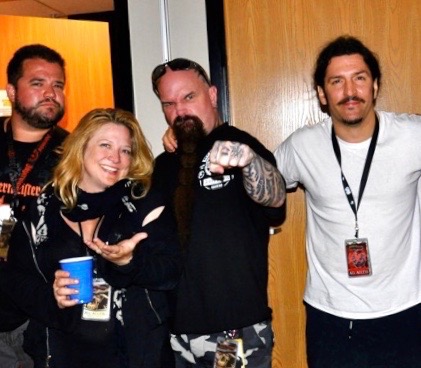 The second person in the series of showcasing live music professionals is my dear friend and roommate, Laura Murphy. She manages Art of Shock, the band I was supposed to be on tour with right now as their tour manager. We would be in Toronto, ON in Canada today if the tour wouldn’t have been postponed.

Laura has one of the most extensive backgrounds in music I know, spanning 30+ years from her high school years until today. I don’t think I could summarize her respectful career well enough to honor all of the phases so I’ll mention some keywords instead that will alone make you raise your hat to her:

If these won’t make you read her interview I don’t know what will. Here’s Laura’s story.

What do you do in the music industry?

Well, I actually wear two hats. I am an Artist Manager and a Naturopathic Physician, specializing in health and wellness of performers and those working in the creative fields. For the purposes of your blog today, I will focus mostly on the artist management side of things.

So,… As an artist manager: here goes… I advise and counsel musicians in the negotiation of terms governing all manner of disposition, use, employment, or exploitation of their talents and the products thereof. I advise and counsel my artists’ professional employment and, on their behalf, I consult with the record label, distributors and prospective business partnerships, so as to assure the proper and continued use for the artists’ service. I also confer with the artist in connection with all matters concerning their professional career, business interests, employment, promotion, travel, gear purchases and endorsements. The manager will also advise and counsel the artist concerning the selection of music producers, booking agencies, publishers, accountants, and legal counsel; as well as video production, social media, merchandise companies, publicists, and road crew. I am probably forgetting to include so many other things! Lol!

How did you end up working as an artist manager and a naturopathic physician?

It’s a long story, spanning many years, so get comfortable. My 30+ year foray into the music industry began in the early days of the explosive Seattle music scene. While still attending high school, I began booking popular young bands and helping to establish roller skating rinks as non-traditional, underage local music venues throughout the Seattle area, helping to develop a badly needed all-ages live music community in the Northwest.

By the time I reached college, where I studied marketing and audio engineering at the Art Institute of Seattle, I began booking some of the most notorious Seattle live music venues. I booked the two hottest clubs at the time, The Vogue and the Offramp. This earned me a reputation for finding the most promising talent in the burgeoning Seattle scene. By 1989, after working closely with the best young Seattle bands, one of my closest band clients, Alice in Chains, brought me to Silver/Curtis Management.

Susan Silver and Kelly Curtis had just begun managing Alice In Chains along with their other clients Soundgarden and Mother Love Bone (who later became Pearl Jam), to name a few. During this time in artist management, being the queen of multi-tasking, I also accepted an A&R position for Disney’s, then brand-new label, Hollywood Records. I helped to build the fledgling label from 1990-93 and continued on as an independent A&R and marketing consultant for several major and independent labels, all while still a member of the Silver Management team. I worked alongside Susan Silver, Alice In Chains, Soundgarden, and their other clients for nearly a decade, until Susan shuttered her company in the late 90s.

My time with Susan Silver was invaluable. While accruing a solid, hands-on knowledge of management and booking, I also garnered a vast array of experiences in the worlds of touring, marketing, merchandising, promotion and Internet commerce. As a result of these multi-genre experiences, I now possessed great operational understanding of both the corporate music industry structure, as well as the ins and outs of the grassroots Indy world.

After spending a year in the wilderness of the Pacific Northwest raising wolves – a story for another time – I decided to move from Seattle to Los Angeles.

Within weeks of relocating to Los Angeles, I accepted a major label position, overseeing all of the National Marketing and Advertising for A&M Records, at their iconic Charlie Chaplin lot in Hollywood and remained there until the company was bought out and folded into Universal Music Group.

Not one to stand still for too long, I joined Warped Tour owner and touring guru, Kevin Lyman and his company 4-Fini Inc., where I went on to co-manage, with Lyman, Capitol recording artists, Less Than Jake. The co-management experience was very complementary, and our team was very successful in developing Indy bands into international acts. In just under three years of working together, Kevin and I took on many other promising management clients such as The Ataris (Columbia Records), H2O (MCA Records), Sloth (Hollywood Records) and the Flying Diablos Freestyle Moto X team featuring the Metal Mulisha superstar riders, Carey Hart, Brian Deegan. And Ronnie Faisst. In the spring of 2001 Lyman merged the management company and touring enterprise, with Happy Walters’ Immortal Entertainment, bringing along with them their management clients and national touring events.

In October of 2001, when Lyman made the decision to focus solely on the development of the Immortal Touring Division and left artist management altogether, I successfully took this opportunity to take the leap back to the indy world. Using my innate understanding of the industry and combining it with my years of developed expertise, I finally formed my own company, Murphy Management, where I continued to discover, develop and mentor talented and promising recording artists until 2005, when my life took yet another direction.

In 2005, just after the devastating Gulf Coast hurricanes, I once again partnered with Kevin Lyman, to form the Unite the United Nonprofit Foundation. Wanting to do something to involve our community of artists, friends and colleagues in fundraising and increasing social awareness, UTU began running an online charity auction, hosting fundraising events and organizing community volunteer efforts to help with hurricane aid. The foundation’s efforts eventually expanded to supporting grassroots charities of all types and developing community volunteerism events across the United States. These efforts eventually bestowed upon both Kevin and I, The Presidential Service Award from the White House.

Still another chapter remained to be written.

My entertainment industry colleagues were astounded when I announced I’d be temporarily trading in my backstage credentials for a medical degree. Following my true calling, Murphy spent the next four years at the top of her class earning a Masters of Science Degree in Eastern Medicine. With a healthy dose of knowledge, and a clear direction, I founded The Healing Agency Natural Healthcare. Knowing all along there was a giant void to be filled for naturopathic health services in the entertainment industry, I wanted to create a solution that seamlessly paired my years of experience in the music industry with my calling for medicine.

So, after several years of operating a concierge naturopathic medical service, I was called upon to join the Rockstar Mayhem Festival, as the on the road Tour Physician and Nonprofit Coordinator.

In addition to treating the touring artists, production crew and festival staff with acupuncture and herbal medicine, each date of the Mayhem Tour I organized national and local nonprofits on-site, to engage and expose fans to charitable causes.

Seeing how many aluminum cans were being distributed by the title sponsor, Rockstar Energy Drink, I worked with the tour’s producers to organize and implement a large daily volunteer crew, to assist the nonprofits and run the day of show recycling program. This is a position that can be carved out at any festival, in my opinion.

I toured with the Mayhem Festival for 4 consecutive summers, treating and counseling many of your favorite rock bands via the wonders of natural medicine, engaging dozens of nonprofits and organizing hundreds of volunteers.

After the Mayhem Festival, I joined the production team at Coachella, assisting them with their high profile, executive and celebrity guests. I have now been a part of the Coachella team going on 5 years. I always have my medical bag nearby to offer naturopathic treatments when necessary.

In this most recent phase of my career, I am still running my private naturopathic medical practice and am again managing Artists. I have only one management client, my husband’s band, Art of Shock. They signed with Century Media/Sony Music, wrote, recorded and just released a new album. The band was getting ready to hit the road on a US tour… until the corona virus hit… now we are all in a new reality. Stay tuned for what is next.

The moral of my story is: you can always carve out a place for yourself in this industry. Find a need and fill it. Don’t be afraid to shift gears and create a new position, where none like it has existed before.

What is the best thing about your work and on the other hand, the biggest challenge?

The best thing about my work as an artist manager is helping to nurture the creatives of this world. Working with a new, young artist is like tending to a seedling and helping it to grow, so that everyone in the world can experience and enjoy it. The biggest challenge, is trying to protect the artist, weeding the beneficial opportunities from the poachers and predators.

I guess you could say, artist managers are like music gardeners. We do not actually create this beautiful thing, but we nurture it, protect it, harvest it and help send it to market, to feed hungry music fans all over the world.  Sorry! I think the quarantine cabin fever is getting to me! ☺

How is the Coronavirus affecting you and your work?

The viral outbreak is creating a new reality for us all. The artists that I manage have had to postpone their tour. They released a new album a few days ago, without the benefit of live performance to promote their music. Now is the time to get creative, to think outside of the box in order to find new ways to promote music globally.

Your best survival tip for fellow people in the industry in this situation?

Breathe. This too shall pass. Reevaluate what it is you have always wanted to do and go for it. Like it or not, it is a new world now. Take this time at home, to discover or develop your true self.

Feel free to promote yourself and your services, how people can find you on social media, etc.

Check out The Healing Agency for tips on how to stay healthy at: https://www.facebook.com/HealingAgency/

Current news about the live music industry:
Washington Post: Live music is on an indefinite hiatus. Here’s how it’s affecting touring musicians and their crews.