A couple of weeks ago, an industry friend who I met earlier this year at Tour Link shared a post about a shadowing opportunity on Facebook. I contacted the person behind the original post, Chez Stock, and fortunately, she was ready to have me shadow her at their show in Los Angeles. This is a great example of networking, which really is vital within the music industry. Most of the job opportunities are acquired through already existing connections. It’s important to know people and be known.

Chez, the TM/FOH Engineer (Tour Manager / Front of House Sound Engineer) of Kevin Morby, has over ten years of experience within touring. What’s awesome about her is that she wants to advance the situation of women within the industry by hiring women on her tours and letting women shadow her.

The show on April 7th was the second one of two consecutive sold out shows of Kevin Morby and Hand Habits at the legendary venue in West Hollywood, the Troubadour. This was my first time there and the atmosphere of the venue was something from the past. I could almost feel the gigs and see the rock stars that had performed at the Troubadour since its opening in 1957: Joni Mitchell, Guns N’ Roses, W.A.S.P., Metallica, Elton John, and so many more.

One of the best clubs in America

W.A.S.P. is one of many bands that has performed at the Troubadour
We started the night with a soundcheck to make sure that all settings were still in place from the previous night. Once all the musicians were satisfied with the sound, I followed how Chez handed all of us our wristbands and finalized and printed out the set lists and guest list for the night. We talked about hospitality arrangements during the tour and how Chez handles all the details on the road. She wasn’t the first person I’ve been talking to to recommend Master Tour for tour management.

I helped tape fresh roses to mic stands before the show
Before the doors opened, I watched how Chez set up the merch kiosk with a local seller. She showed me the system they use (atVenu) and we exchanged thoughts about merch sales. Not much new on this front but it was cool to get to know atVenu, which seemed like a very diverse tool.

The merch kiosk was set at the bar
Probably the most interesting part of this shadowing gig to me was to be able to join Chez when she settled the gigs with the venue promoter. This part of touring was totally new to me. I got to see the show contract based on which we checked with the promoter that all the revenues and expenses matched. I learned to pay attention to certain venue and promotion costs and when something should be double checked.

During the show, I sat at FOH with the sound and lighting engineers and followed their work. It was interesting to see how they, together with the venue security, made sure that the show was a great experience for both the fans and the artists. This show was also a great example of the venue and tour crew working together and helping each other. Even if it wasn’t nice to watch Chez running between the FOH and the bathroom, suffering from a sudden food poisoning that arose right before the gig, I was impressed to see how the venue staff jumped in to cover for her when she needed it the most. That’s one of the downsides of touring, if you get sick you still have to do your job. So far, I’ve been fortunate not to get sick during any of my tours. But Chez was a real trooper and kept rolling throughout the show – impressive! 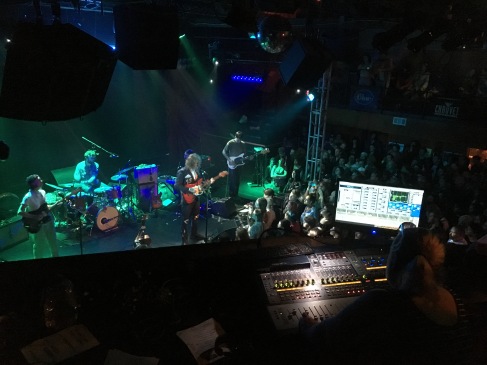 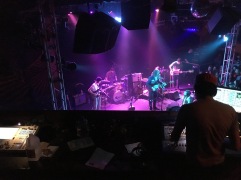 The band had fun on stage
I feel super thankful for this opportunity to shadow a professional in her work. Compared to working myself and trying to see what the other crew members are doing it was great to concentrate solely on shadowing and exchanging thoughts. I feel like I learned a lot and the different roles within touring became clearer to me. At the moment, I’m the most interested in tour management and this experience only strengthened the feeling.

I’m really looking forward to my next shadowing gig! I already have one show lined up, I will tell you more about it later. 😉